Quick lighting tips for your event

1. USE LEDS FOR EVENT LIGHTING

LEDs are around ten times more efficient than their tungsten equivalent. That means ten times less electricity to produce the same level of brightness. They can last hundreds of hours longer, emit less heat and are cheaper to manufacture and replace.

A RAINBOW OF OPTIONS

Using RGBW LED chips (a combination of red, green, blue and white light-emitting LEDs) you can electronically control your mix to create any desired colour. Before this technology, you would have to put a coloured gel in front of an incandescent fixture and if you wanted several colours throughout a show you needed to set up and rig several fixtures each with an appropriate gel, and then you couldn’t change colour or position! RGBW LED chips allow you to play with the rainbow.

A moving or ‘intelligent’ head, one that employs controllable motors on the lamp and its lens, allows you to move your light around ‘intelligently’. All movement can be pre-programmed in the lighting desk by the operator and recalled across the rig at the press of a button. When rigged on lighting bars and flown above stages, LED fixtures can create spectacular lighting schemes using a fraction of the time and energy that would have been required just two decades ago.

LED technology has created new types of equipment that were impossible barely a decade ago. As they can be made very small, when fitted together closely they have the ability to change the quality of light they are outputting instantly. This technique is referred to as pixel mapping and it has many exciting applications.

One of the most effective uses of pixel mapping is when they are sent through the image source material. LED fixtures designed for pixel mapping are usually a square or rectangular grid, pad or tablet fitted with anywhere between four to over a thousand individual LEDs. The 2012 London Olympics Opening Ceremony used pixel mapping on a grand scale. The front of each seat was fitted with a sixteen LED tile projecting one ‘pixel’ of a huge digital image.

Even more exciting, you can send LEDs through the video source material, video which can be set to display across several fixtures at once. This means the image canvas can be as simple as a screen-like grid or as complex as dozens of differently shaped fixtures rigged and set across your performance space, creating a synchronized ‘broken’ image effect. Best of all any content can be mapped, from your company’s logo on loop to a product promotional video. Plus the controllers and software that are used for pixel mapping often come with a generous amount of their own generic content that can be deployed as effects. 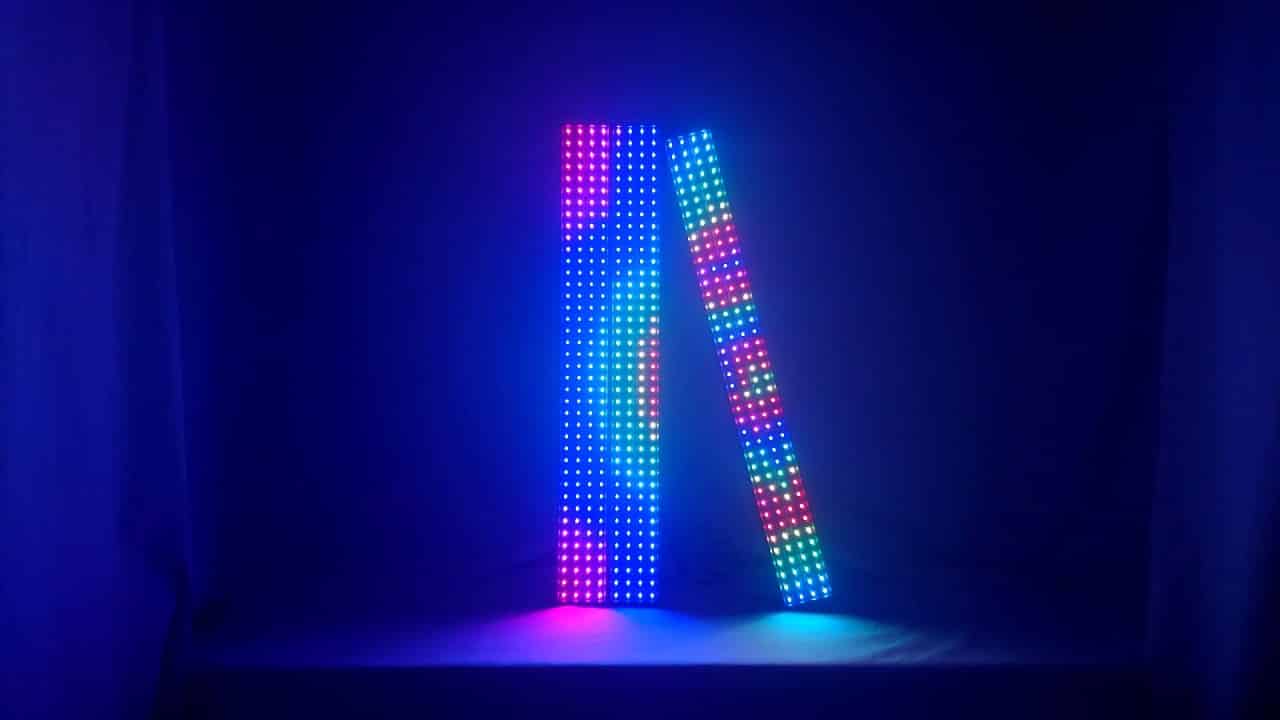 3. GET CREATIVE WITH HAPPY TUBES

The flexibility of LEDs has been utilized to create a new type of fixture called the LED tube or the Happy Tube. These tubular fixtures are available in different lengths with varying amounts of LEDs but the most common specification is around one meter long with 96 to 144 LEDs. These tubes are incredibly adaptable. They can be joined, hung, flown, stacked to form a screen and used to emit light or images. You can use them on the outside of buildings to highlight architectural features or hang them from the ceiling like a chandelier. You have probably seen them used in all kinds of live events from rock concerts to conferences.

These happy tubes can be mounted on just about any physical structure, making them a must for any event. They work on the edges of stages, screens, lecterns… you name it they fit! Once they are set-up and addressed from the lighting desk they can glow softly as an outline or pulse and ripple with waves of light. Like the pad, grid and tablet LED fixtures, image and video can also be mapped across tubes, but have the added ability to be arranged in a circle to form a 360° element, perfect for a feature at a gala dinner. Using a clever assortment of tubes you can create any effect you desire – both coherent and abstract.

4. MOVE YOUR AUDIENCE WITH MOVING HEADS

Moving heads pre-date the LED revolution but were large, unwieldy and very expensive reserved only for elite theatres and concerts. Nowadays, moving head fixtures to use digitally controlled motors, which enable all sorts of light movement and have become common even at the low end of lighting budgets. A must for any professional event. 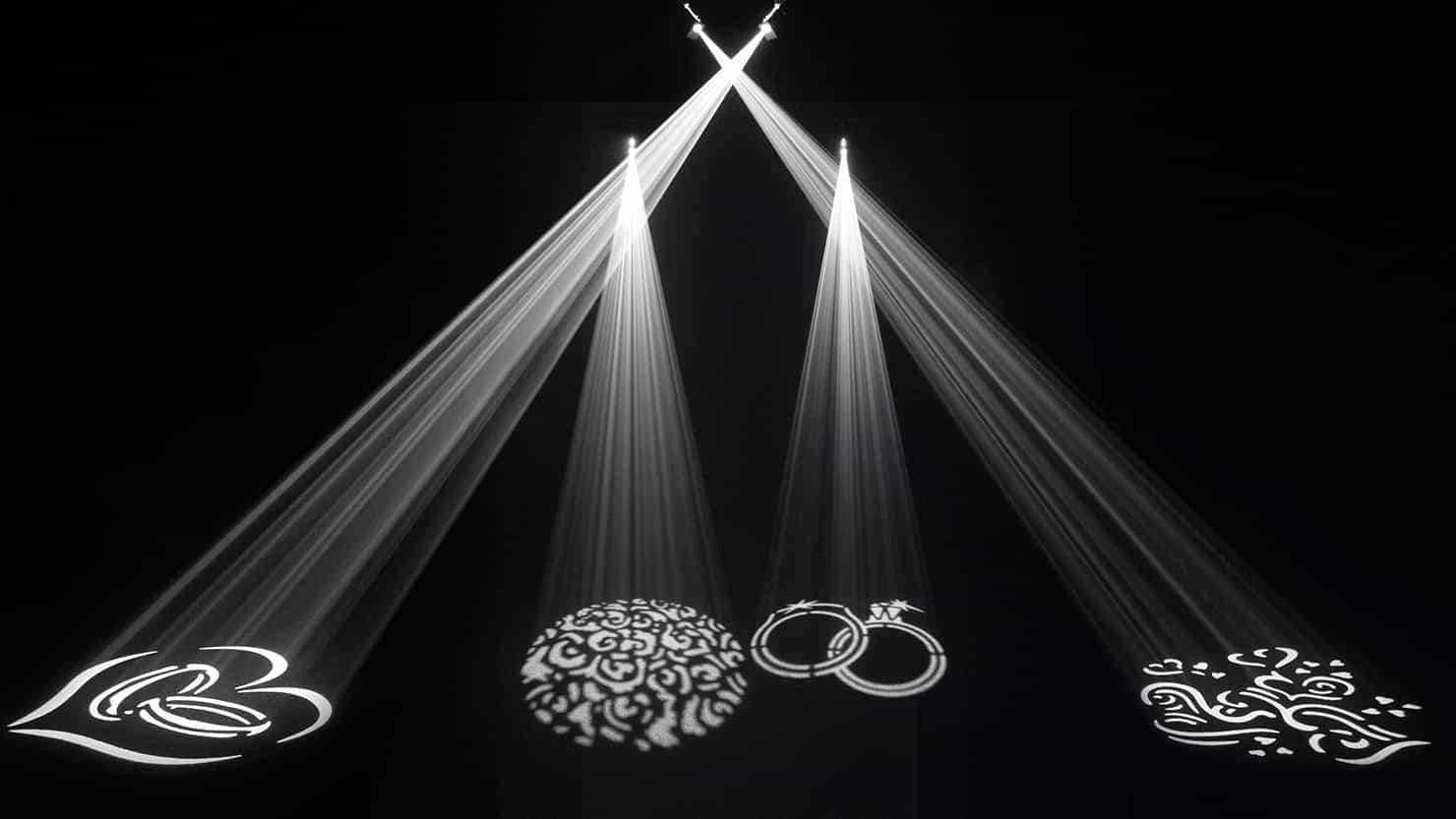 In combination with LEDs, rotating lenses and other new technologies, moving lights have invigorated the oldest of lighting techniques: the humble Gobo. A gobo was originally a piece of metal with a pattern of holes cut into it that you placed in front of a light. They could be used for simple diffusion or to create a recognisable pattern, such as geometric shapes or leaves. As technology progressed, glass gobos were developed that could incorporate colours and detailed imagery. With modern LED fixtures a moving head fixture can use plastic gobos, less delicate and easier to manufacture than their traditional counterparts. Moving heads can even hold multiple gobos, sometimes more than one at a time creating interesting detailed textural effects.

5. USE DYNAMIC VIDEO FOR EFFECT

New types of moving head LED fixtures can even be used as video projectors – not just your average projector, these moving head fixtures can vary the focus, angle, width, brightness and colour of the video dynamically in real-time. Projecting video from a moving head projector is almost like having an animated gobo, which can be used for some pretty incredible effects. When projected on a loop with strong texture and colour you can simulate immersive spaces such as a forest or a city skyline. This can be used as a subtle but dynamic wash on a stage or across a wall.

Lighting operator desks have evolved along with the fixtures and are designed to integrate with servers that host video files, fixtures that have video inputs and software that controls and edits video in real-time. All this added complexity means there will most likely be two sets of video infrastructure and operators to manage.

6. ASK YOURSELF THE RIGHT QUESTIONS ABOUT YOUR EVENT

With so many new lighting technologies at your disposal you have to consider a few things:

‘Old School’ event lighting (analogue tungsten and halogen lighting with gels) still have their place. Many designers prefer white light of a traditional source to an LED and in many venues (particularly theatres) the installed lighting rig will still contain many traditional fixtures. A combination of both old and new technology often combine for the best results. Incorporating traditional fixtures to your lighting scheme expands your palette and makes your budget go further.

At EFFEX Lighting we are all about making your content king! When technology becomes the main attraction of an event, then you’ve lost your purpose. As they say in theatre “If the audience is looking at the set, there a problem with your show”. While we have the ability to create an artwork of pixel mapped video and columns of revolving happy tubes, using the right tool for the right job will always be more effective.

Curious what we can do for your event? Let us know!